Though having stayed in Chennai for around two years, I don’t think the Chennai autos are as bad as they are made out be. See the way it works is like this:

Scene:
Chennai. Saturday morning, 11:00am. You wish to go from Thiruvanmiyur to Spencer Plaza, Anna Salai.  You approach the nearest parked auto(s)…

You: Anna Salai, Spencer Plaza
Auto-driver:  Anna Salai? Spencer Plaza?
You: Yes
Auto-driver: (Nod of head, indicating his willingness to go)
You: How much?
Auto-driver: One twenty Rupees
You: No, that’s too much (Accompanied by a disagreeing nod of the head)
Auto-driver: Ok, how much?
You: I pay sixty Rupees everyday
Auto-driver: (Why-are-you-kidding-with-me kind of a smile and head-nod)
You: (Keeping a straight I-am-in-control kind of face)
Auto-driver: Ok, hundred
You: No, sixty
Auto-driver: (with his eyes he has conceded that you are not a total knock-over) Ok, eighty. (And as if to show he means business, he bends over to pull-start the auto — since the Bajaj autorickshaw models have an oxymoronish hand-kick)
You: Ok, seventy final (and now you bend to get into the auto and convey that you mean business too!)

I templated this kind of exchange, and it worked 9 out of 10 of times.  And each such exchange, would set the benchmark for the price — to be bettered the next time, or at worst, held on to! For example, in the above scene I would have actually paid 75 rupees the day before! Soon you would come to a point where 9 out of 10 auto-drivers would not accept your intended price — now that is the free-market price!

This contrasts with Bangalore (2001) where, at 8:30pm my hosts requested me to finish dinner quickly otherwise we would not get autos to get back home. The auto-driver is told of the destination. Agrees to it, and then says it is already time for the night-charges. We agree. We get in. He starts the auto. And after about 2-3 minutes of driving stops to inquire if we meant point A or point B. And whatever be our preference, he had misunderstood it as point B or A, respectively! And obviously it was going to cost us more. Now that there is already an escalation of commitment, we have no option but to agree!

Obviously this contrasts with Mumbai where (in a majority of places) you get into an auto and just state where you have to go. And if you get into an auto/taxi at 11:30pm for a journey that is likely to take 1 hour — at 12 midnight, the driver makes a note of the meter reading, and then at the end of the journey — charges you regular fare for the first 30 minutes and the night-fare only for the last 30 minutes of your ride. (Yes this has actually happened to me!)

And of course this contrasts totally with Delhi where you get into an auto/taxi at 10:15pm for a journey likely to take 40 minutes. Somehow, you get delayed and the journey ends at 11:05pm. The driver would insist that you pay night-charges on the entire journey! And some people would pay up out of gratitude that he didn’t  rape or loot them!

Delhi auto-drivers actually give you justifications for the way they are. Consider this banner I saw on the back of an autorickshaw sometime back.

What it roughly says is: 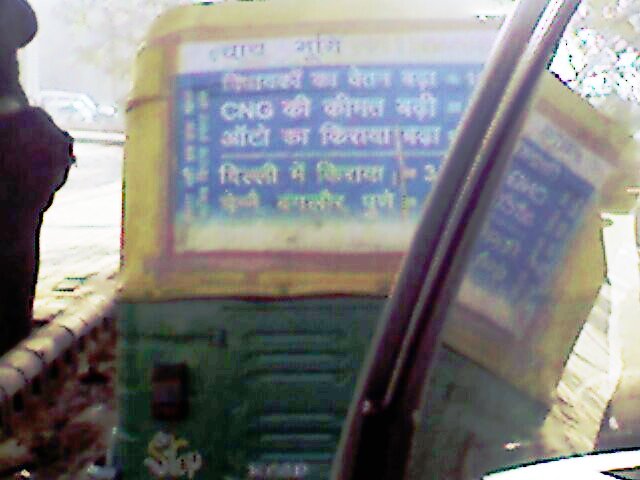 Sadly the photo is bad, but you get the picture, right?

(Even if we want to) How can we remain honest?